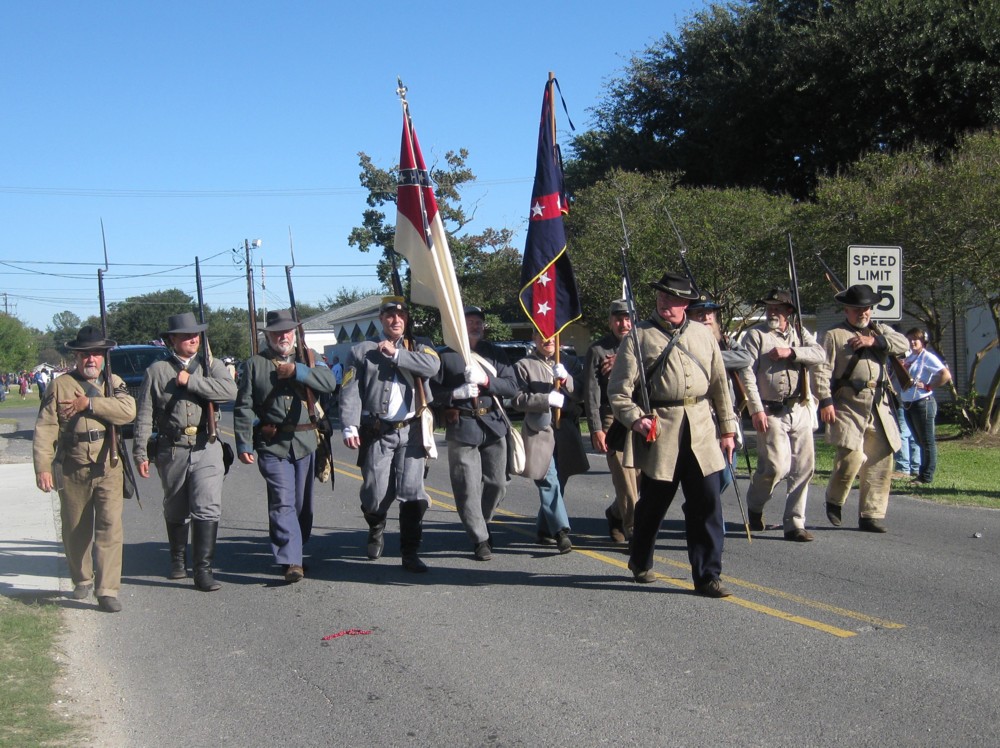 On Sunday afternoon, November 7, 2010, the City of Port Allen, Louisiana (located on the west bank of the Mississippi River, opposite of Baton Rouge), held their West Baton Rouge Parish Veterans Day parade.  A U.S. Marine color guard, various active military units, high school JROTC squads, law enforcement units, and a bagpipes and drum corps led a procession through the streets of downtown Port Allen (a 1.6 mile route from the city's baseball park to the Parish Courthouse).  Included in the procession were a number of convertibles (that featured beauty queens and veterans), floats, decorated trucks and trailers (that carried U.S. veterans from W.B.R. and neighboring parishes, as well as a number of dignitaries, local celebrities, and patriotic people of every walk of life).  Included among those participating was a Confederate unit, sponsored by the Henry Watkins Allen Camp 133, Sons of Confederate Veterans, of Baton Rouge.

Following a singing of the National Anthem, an eleven man Confederate re-enactor color guard opened the festivities with rifle fire, followed by artillery fire from a four man gun crew of the Fifth Company, Washington Artillery re-enactors.  Newly elected Louisiana Lt. Governor, Jay Dardenne, eagerly accepted the invitation to fire the cannon.  With that the parade began, with the procession marching past the Confederate re-enactors lined on opposite sides of the street, and between the Confederate Second National Flag on the east side of the street and the Richard Taylor styled 2nd Louisiana Cavalry Flag on the west side of the street.  About mid-way of the procession, the Confederate Color Guard fell in behind the Allen Camp's truck & trailer.  There were seven riders on the entry, including three ladies in period dress and two uniformed youngsters.  The Confederate Color Guard fired a number of times during the march, including once to honor those veterans gathered in front of the Parish Museum and once at the end of the parade in front of the West Baton Rouge Parish Courthouse (the front of which was covered by a giant United States flag).

Listed below are the camps and units that participated:


Thanks to everyone who assisted in offering this Confederate presence. 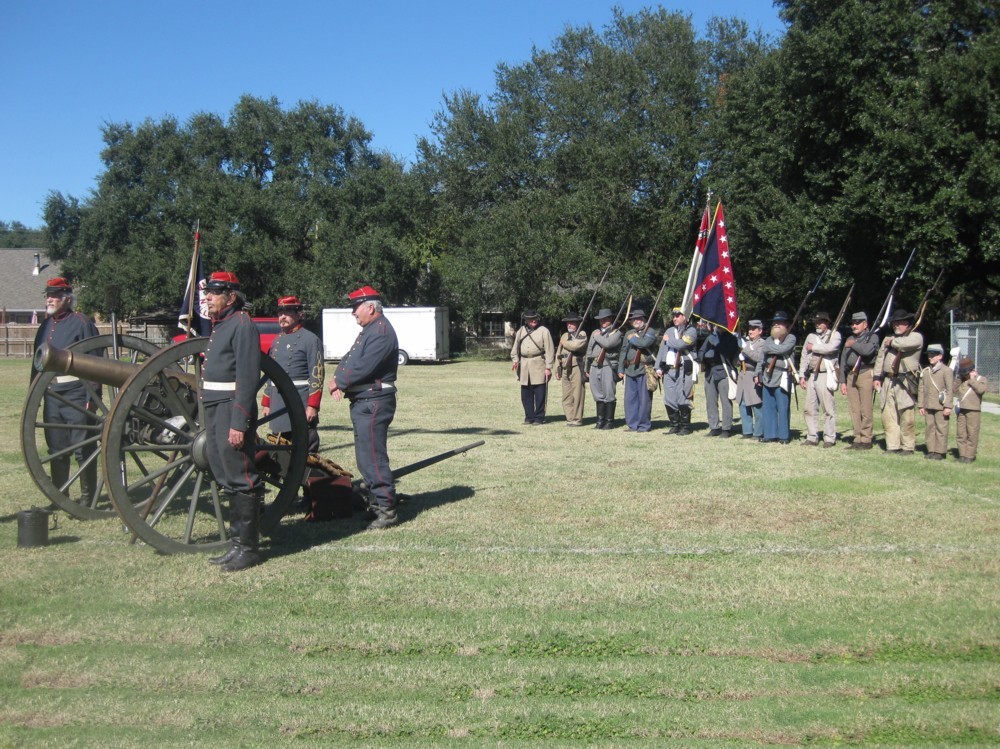 Members of the Allen Camp took part in "Living in the South Day" at Prairieville Middle School in Ascension Parish, on April 23, 2010.  Camp Commander Randy Jarreau, as well as camp members James Cannon and Dustin Milam helped out with the event by given a living history presentation to students at the school.  Among the topics discussed with school children were Civil War medicine, military uniforms, examples and reasons for the various Confederate flags, causes of the war, and general living conditions of soldiers during the war.

Members of the H. W. Allen Camp, Randy Jarreau, Bill Rome, Scott Broderick, and Robbie Rome, attended a rededication ceremony on April 16, 2010 of the Confederate Monument at the East Feliciana Parish Courthouse in Clinton, LA.  The ceremony, which was conducted exactly 100 years to the day from the original ceremony, included portions of the original dedication ceremony from 1910 being read to spectators.  Members of the Feliciana Chapter #2665 - United Daughters of the Confederacy presented a wreath at the ceremony. 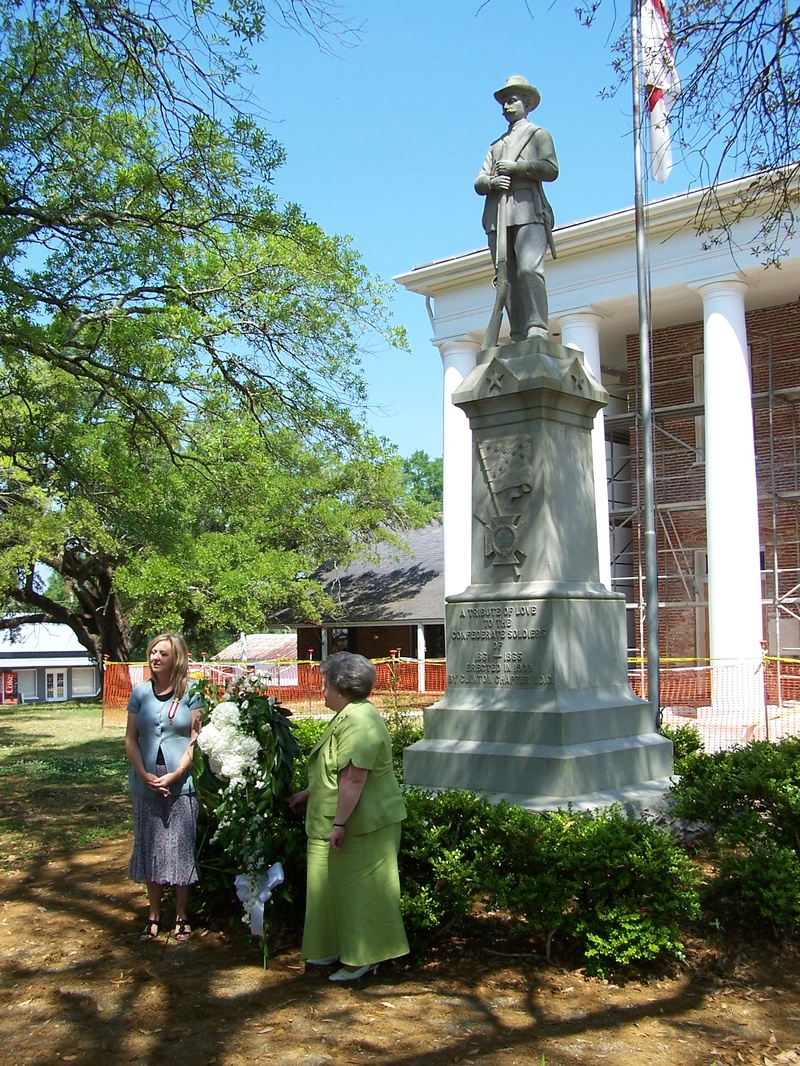 On March 26, 2010, The Henry Watkins Allen Camp of the Sons of Confederate Veterans honored Zachary High School's Army JROTC Cadet Second Lieutenant Felecia Dunford.  At the school’s annual JROTC awards banquet, SCV Compatriot James Cannon presented Dunford with the H. L. Hunley JROTC Award in recognition of her demonstration of strong corps values, honor, courage and commitment to her unit during the past school year.  This award marked the first presentation of the medal in the State of Louisiana. 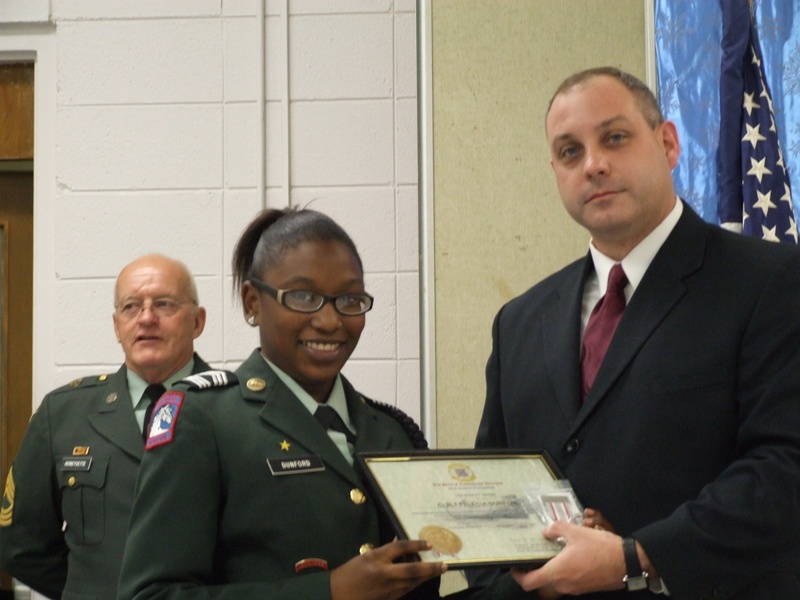 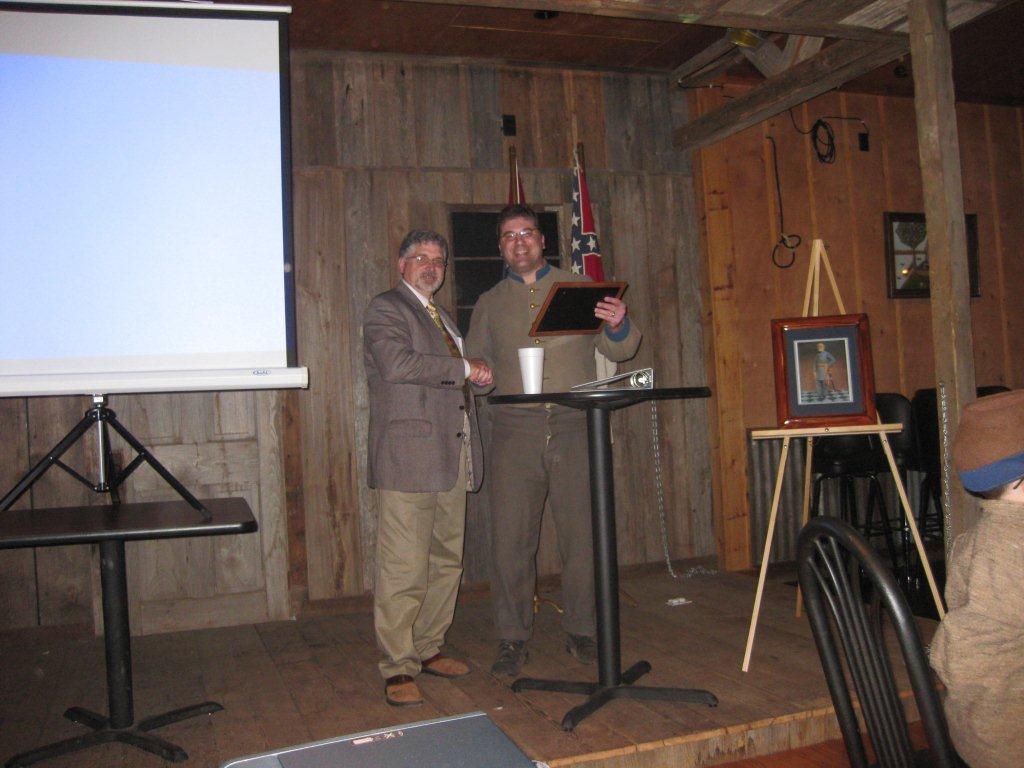 The Henry Watkins Allen Camp annual Lee-Jackson Banquet was held in conjunction with the Brig. General Francis T. Nichols Camp #1362, and the Military Order of the Stars and Bars C.S.S. Arkansas Chapter 21.  The event was held at Bergeron's Cajun Restaurant in Port Allen, LA on January 23, 2010.  The event which had approximately 50 attendees, featured author and historian Jeff T. Giambrone giving a presentation about the involvement of the 21st Mississippi Infantry regiment in the Battle of Malvern Hill.